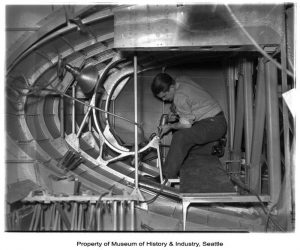 I come from a long line of craftsmen. My father remodeled old houses while we grew up in them- tearing them down to their studs and rebuilding them with traditional details, including beautiful wood molding that he milled himself in his shop in our “Michigan basement.” My mother is a seamstress in her spare time. When she walks into expensive clothing stores, she surreptitiously turns the clothes inside out and looks at how they’re constructed. Later she can reproduce them at home. My paternal grandfather designed turbine engines for Chrysler. My maternal great grandfather was a tailor, professionally. Its no wonder I’m drawn to the details in architecture.

I have been with FabCab since January, but I have been working in architecture for ten years now. I have a background in residential design, prefab and sustainability. The “HOW?” and “WHY?” of construction have always intrigued me. And I often find myself contemplating craftsmanship in architecture. 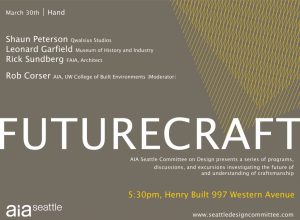 Awhile back I attended a thought-provoking discussion put on by the Seattle AIA’s Design Committee. It was their first in a series called Futurecraft, which aims to “investigate the future and understanding of craftsmanship.” This particular discussion focused on the role of the hand in craftsmanship and began with a presentation by Shaun Peterson, a Native American artist working in many mediums. He spoke about his experience with wood carving, specifically the Welcome Figure which now stands in Tacoma. He learned his woodcarving craft as an apprentice, first taking care of a master carver’s tools and then building his own tools. His tools not only helped him create the sculpture, but through their abilities and limitations they also shaped the design of the sculpture. For example, a traditional canoe bailer looks like a bowl made of wood. But there is a pointed rise in the center of the bowl- if you imagine taking a vertical section through the bowl, the inside shape would be something like a W. This results from the type of chisel with a long handle that used to carve the bailer. It made flattening the inside bottom of the bailer difficult, and since this was a utilitarian bailer, it was left in this honest form. 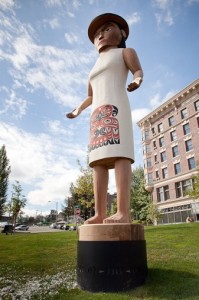 Peterson also spoke of his struggle with the tradition and history imbued in a craft and its application to today’s available materials. Traditionally, Pacific Northwest tribes would carve large wooden figures out of massive fallen trees. Today, it is more difficult to find deadwood like this that is large enough and not overly checked. Peterson’s Welcome Figure is made of a single piece of wood which was sliced down the center to remove the checked heartwood. A steel plate was laminated into the center of the figure, and steel tubes are fitted into her legs to better stabilize the sculpture. Some traditionalists frown upon this as being “unauthentic,” other craftsmen see this as using the materials we have at hand today. 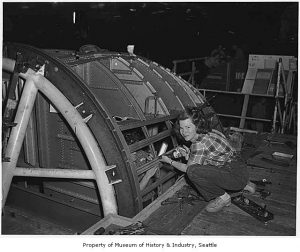 Leonard Garfield is the director of activities at the Museum of History and Industry. He spoke briefly about the culture of craftsmanship in Seattle. Specifically, he spoke of traditional boat builders and sail makers, and how their skills and craftsmanship were used in the first airplanes built by Boeing. Although on an industrial scale, each plane was constructed by hand by a series of craftsmen- very different than the Ford assembly line construction method. He made an excellent point that craft can be looked at as a process rather than a product.

The final presentation was made by Rick Sundberg, a design principal at Olson Sundberg Kundig Allen until opening his own firm in 2010. He spoke of craft in architecture, focusing on the rigor inherent in the process of design and construction. 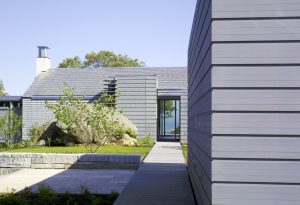 Through all of these presentations and the following discussion, the big question was “what defines craft?” The moderator, Rob Corser AIA, made an excellent point (and I’m paraphrasing from my notes) that craft is like pornography: its very hard to pinpoint exactly what it is, but you know it when you see it.

Is craft inherently historic? Does it run the risk of being overly nostalgic? Is there a certain ingenuity to craft that requires the traditional methods to continue to evolve? What about our modern-day tools, such as the computer? Can something that was designed on a computer be considered a craft?

Personally, I agree with the statement that craft is a process rather than a product. There is an inherent beauty and struggle present in the finished piece that articulates the human element in its design. In a sense, a well crafted piece, be it a wood figure or an airplane or a house, has a sense of soul.

Seattle is steeped in the tradition of craft, and you can see it in the Pacific Northwest style of architecture. Google “Pacific Northwest Architecture” and look at the images that come up- they’re full of warm wood and glass, shed roofs with large overhangs, striking views that celebrate “place,” and above all, buildings that reveal the process of their construction with exposed fasteners and honest materials.

I feel like this is what we are striving for at FabCab as well: homes with “soul.” I have been working on construction details for the past few weeks, reconsidering how a window is framed, what it looks like and feels like from the inside and out, and how it is constructed. There is an amazing amount of craftsmanship that goes into the design of a home even before it is built. Most often, when done well, the finished design belies this struggle- it looks effortless. I believe this is when architecture and construction is elevated beyond a typical tract house- it is a highly skilled craft. It is honest, modern yet appreciative of its traditional precedents, and beautiful. I hope to bring a sense of craftsmanship to each detail and every I consider.