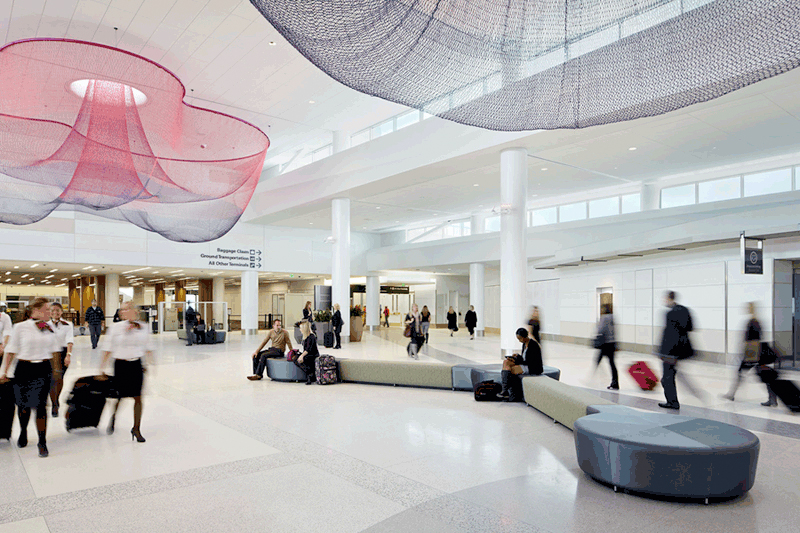 After recently flying out of San Francisco Airport’s new domestic terminal, the first LEED Gold certified terminal in the country, I acknowledged an unusual movement my mouth seemed to be making, considering I was at an airport…I was smiling.

SFO is notorious for long security lines and it was a pleasant surprise to arrive at the newly opened Terminal 2, or T2, and not be daunted by a sea of travelers. T2 was designed to efficiently and comfortably move people and only houses two airlines – Virgin America and American Airlines.

After passing through security, I was ushered into a space that incited the smile. I had happened upon giant jellyfish-esque pieces of string art swaying from the ceiling. They were whimsical and embodied the adventurous attitude of San Francisco. Other than the colorful jellyfish, the terminal is white and has a new-agey feel. Long clerestory windows pulled in natural light, flooding the space and my smile continued even when I passed the bathrooms. Universal Design can apply to elements other than spaces and when I saw the signage for the bathrooms, I liked what I saw – large, clear, directional signage that was FUN and attractive.

The terminal’s principal architect, Arthur Gensler got many things right and succeeded in fusing clean inspirational architecture and funky art from local to international artists. After looking into the project more, I came across the project design brief, which was equally as impressive. The brief was a collaborative effort by SFO/Turner/Gensler and discussed innovative concepts such as:

A variety of seating and lounge areas are innate to the architecture and Silicon Valley’s influence is apparent in the computer cafe areas and standing bars. I also ran into countless eco-conscious practices (such as refillable water bottle stations and compost areas) and relished the atmosphere that encapsulated San Francisco’s diverse charm.

Not surprisingly, I’m looking forward to my next trip to T2.